Not the greatest but still thrilled...Pheasants! 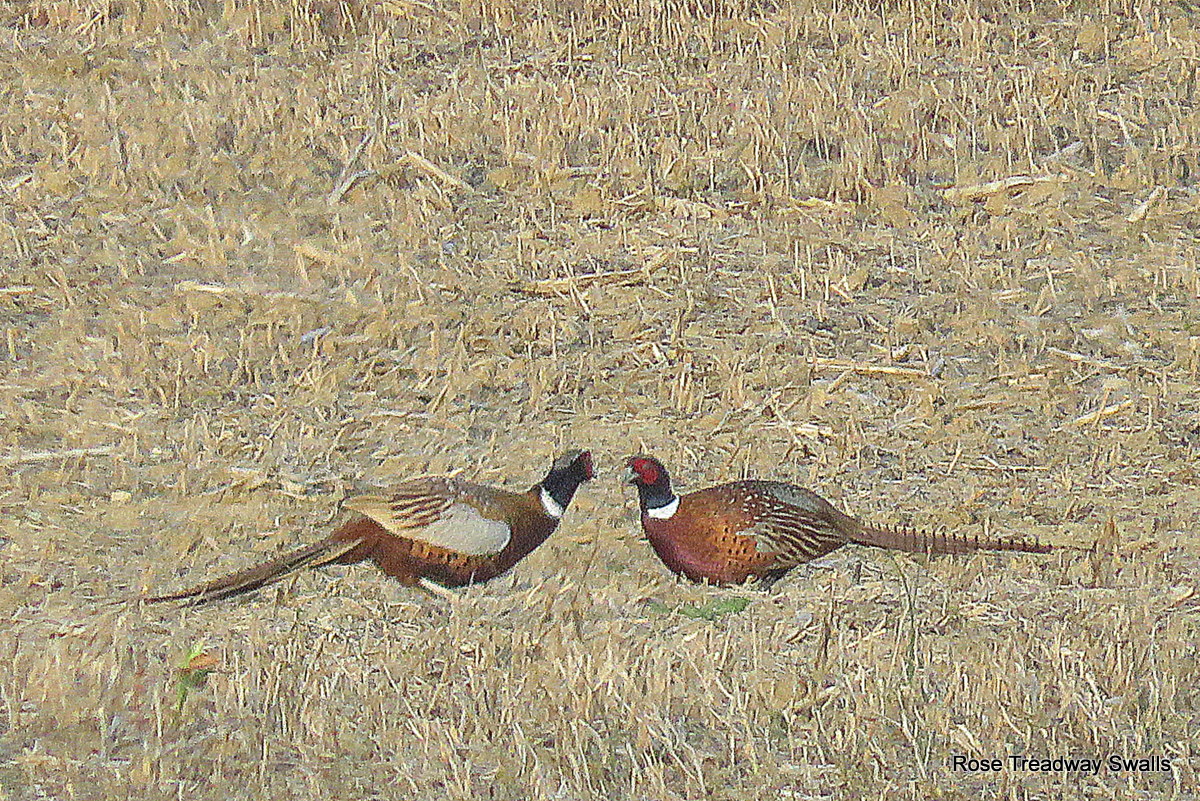 Ring-necked pheasants!  There were three of them, but the other continued running up across the hill.  While these two were almost to the point of fighting. 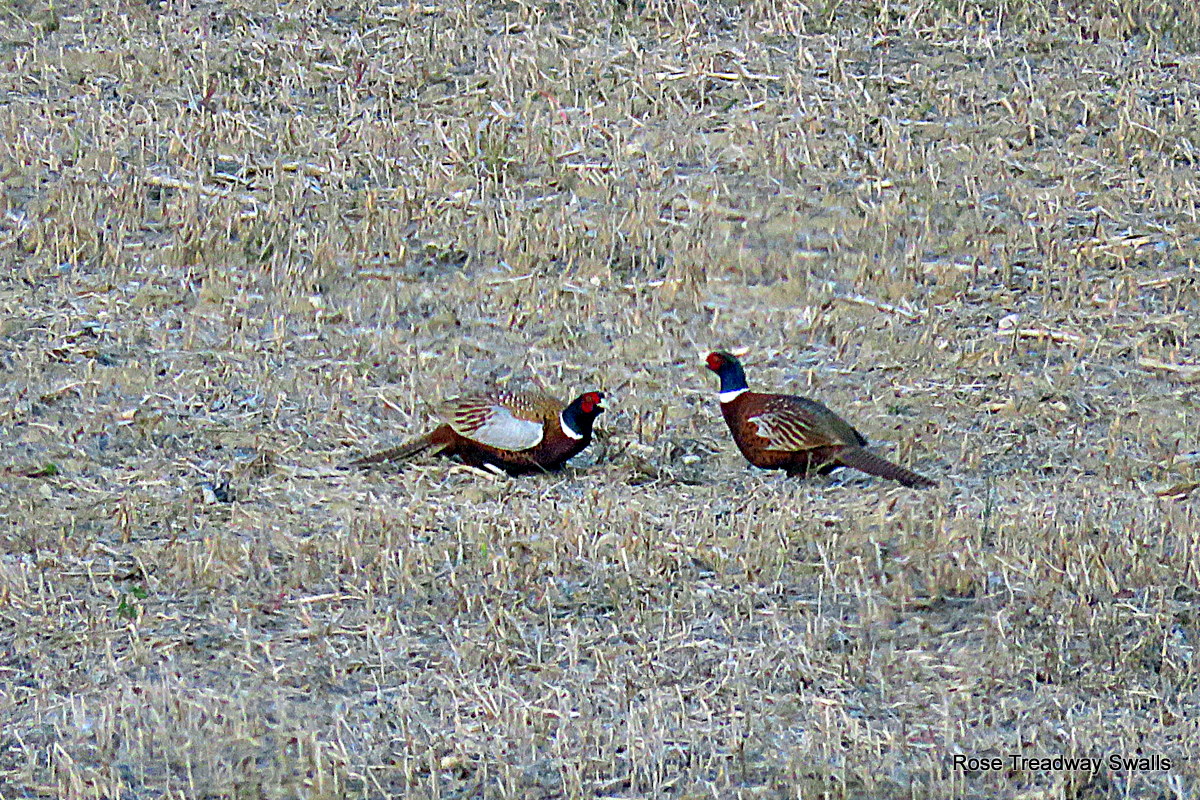 For some reason the colors in these are all over the place...even before I played with them.  I think they look almost like taken in winter...but I promise you they were earlier this week. 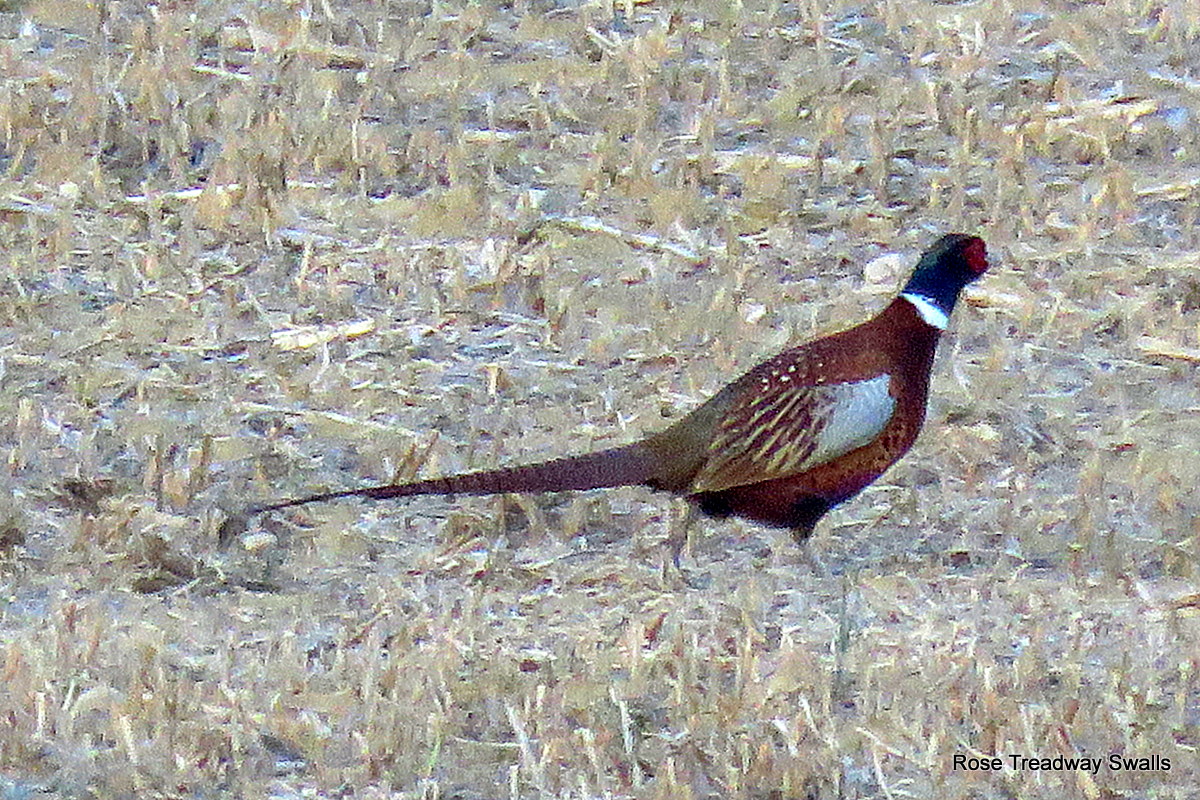 The two picked at each other just a minute or two, they took off running, and I am not even sure that they were running from me.   I have messed with every photo and this is the best I could do.
**********************
We used to see pheasant every time we were at the strip pit area...usually at least two or three.  This entire year, until last night I think we have only saw one.  Then last night, I saw three!  I hope it means they are still there, or are returning.

No short-eared owls, I saw one hawk but I don't even think it was a Northern Harrier.  At one time you would not believe how many came out there.  But it may have been a bit later when they came.  Not sure.  But I know from my past photos, that the owls would have been there by now.
Posted by Rose at 9:35 PM

Beautiful pheasant. What a treat to get to see them so close.

I have never seen a pheasant before. They are very beautiful! You are so lucky to get to see them!

What a treat! They are so beautiful and colorful; really impressive birds! So cool that you were there at the same time! Looks like they were facing off for the attentions of a female. Your header is beautiful!

Great photos captured of these pheasants with beautiful color combinations! I'm not sure if I have ever seen pheasants other than in photos.

I have never seen pheasants either, but I surely would like to. Those colors...Wow!

Beautiful birds. I haven't seen any in years.

We see pheasants here quite often. I even had one in our backyard. You mostly see them along the roads next to farm land. I never tire of seeing them. Beautiful colors and feathers! The Quail are quite interesting too. I love how they will walk in a line one right after the other.

John "By Stargoose And Hanglands" said...

We see pheasants all the time here, mainly because the farmers breed them so they can be shot by so-called sportsmen. Short-Eared Owls are just beginning to appear at this time of year as they fly in from Scandinavia. There'll also be an influx of birds of prey, but if we get a Northern Harrier there'll be great excitement as these are very occasional vagrants from N America.

What a treat to see these birds. They're pretty. I know they're around here but I've never seen them.

Col sighting. The pheasants are pretty. Great photos. Wishing you a happy day!

The pheasants are beautiful. We don't see them here.

yet another bird I have never seen. bob just said last week sometimes he misses hunting with hid dad. I think he said they could have 4 pheasant each, but not sure. he said he liked it better than turkey. I also have never seen a wild turkey... bob was raised on deer, and pheasant and rabbit stew.. they even ate squirrels. UCK

Their colors are so vibrant. Beautiful. Friendship

The Pheasant is such a beautiful bird. You captured them well.

Neat shot of the pheasants. I see them here only occasionally.

i like the way that you treated the three pictures Rose... they are all good... i enjoyed your story about them....peter:)

They are beautiful and I think you did quite well with the pictures.

They are so colourful. I enjoyed seeing your photographs.

All the best Jan

I know we have them around here, but in 30 years I've only seen one once. Saw a grouse in a tree once as well.

Great shots! We don't see Ring-necked Pheasants very often. There is a small relict population left over from the days when they were released in large numbers for hunting, but I suspect that an unduly harsh winter now and again kills off many of them. Last time I visited the UK they were ubiquitous. People were quite amused at my initial excitement at seeing them.

Good photos! Lucky you....I've never seen a pheasant. Glad to know you were out and about getting some photos. I know how frustrating it is when you feel like you haven't taken any photos for awhile and you are just itching to get out there and find something....anything....to photograph.