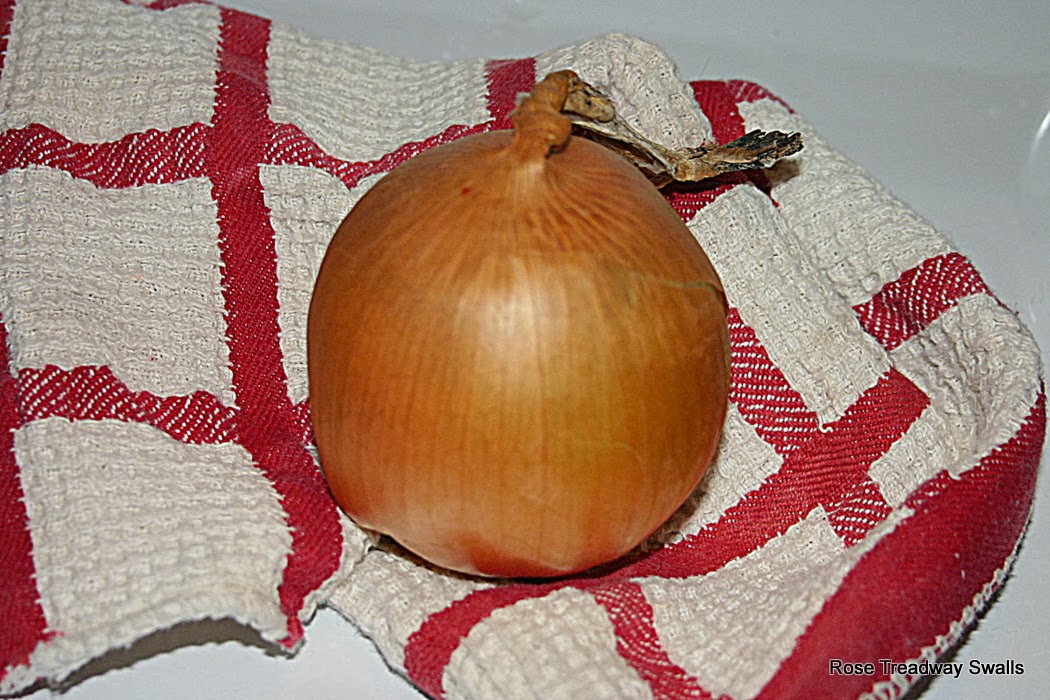 I don't recall if I 'posed' this shot or just happened to think it would make a nice photo.  I love onions, but probably not as much as some people.  Roger's cousin went on a hunting trip in Canada.  I don't know where....he and the guy he was with were dropped off at this remote cabin and the people suppling the food gave them a LOT of onions considering they were only staying a week.  I think it was in the range of 20 or 30 lbs.
Posted by Rose at 8:43 AM

Let's see. How many recipes can we think of that use onions? Funny circumstance and a great shot of the onion.

nice shot, and a great looking onion. my friend Madeline in Savannah could go through 30 pounds in not time.she cooks tons of onions in everything she cooks.

Onions are often sold here in bulk bags. So maybe the cabin had one of those bulk purchases meant to last a season.

Onion recipe: slice 2 lbs onions, add bay leaf and sprigs of rosemary and cook in tbsp of olive oil until brown. Add 1/2C veg broth and cook 'till absorbed, then add less than 1/4C balsamic vinegar and simmer 'til it's absorbed. Season and enjoy.

That's a lot of onions! And yours looks very handsome on that dish cloth.

We use lots of onions but the cousin's supply would be a real challenge. Love the rich color and your capture of reflected light and the red stripe.

Grandma Barb's This and That said...

That's a lot of onions for a couple of guys to use in a week. :)

Love the Onion shown. Jim, bob's son has a huge garden here on the place and grows huge onions. Different kinds, sweet, like Vadalia or Walla Walla Sweets and yellow and smaller onions. We love them. We have piles of them in the barn and Garlic too. MB

We use a lot of sweet onions; put them in everything -- raw and cooked. 30 - 40 lbs is a lot, though. I'd have to share them with others. That's a nice looking onion.